What four million prospecting mails can tell you about the best subject lines re: open rates

There are many things that stand in the way of prospecting success.

Let’s assume you’ve acrobatically leapt over the initial hurdles and your honed-for-conversion email now sits in the inbox of your ideal prospect.

And all they’ve got to do is open it.

Just a click and you know you’ve got another one diving headlong into your sales funnel.

You know you want to open that mail.

What informs a decision on whether or not to click open a prospecting mail?

Well, a glance at your inbox can only give you so much to go on.

And that’s all she wrote.

Which is why the subject line can be a critical deciding factor in that open rate.

What other factors can be in play?

Of course, even with a killer subject line, things can still end up half-cocked.

For instance, a fishmonger is not likely to get caught in the net that ‘[New Blog Posts] Google Ranking Factors +GA Tracking Mistakes’ tries to weave.

If you’re targeting the wrong audience no subject line will deliver the silver bullet.

But assuming your aim is true, it is possible to single out the subject line as the deadly weapon that you can put to use to secure opens.

Let’s look at how you can best hit home.

To produce our study, we’ve dusted down four million prospecting mails from the SoPro vaults.

From recent campaigns to campaigns stretching back to 2017 we’ve crunched the data and chewed over the results.

That actually subject line isn’t really as critical as it is sometimes made out to be.

That’s not to say it doesn’t matter.

But it is to say that conquering deliverability challenges, identifying prospects and writing a mail that hits those conversion buttons are probably more significant when it comes to the overall success of any prospecting campaign.

Across the 50-odd variables that we applied to these mails, the range of open rates mainly fell between:

That’s a difference of just 11.9% between the lowest and highest open rate.

Not exactly earth shattering (and a testament to how well targeted all of our mails are).

Yet percentage increments do matter when it comes to the end results of wide-ranging, far-reaching prospecting campaigns – so let’s see where the gains are and the drop-offs can be found. 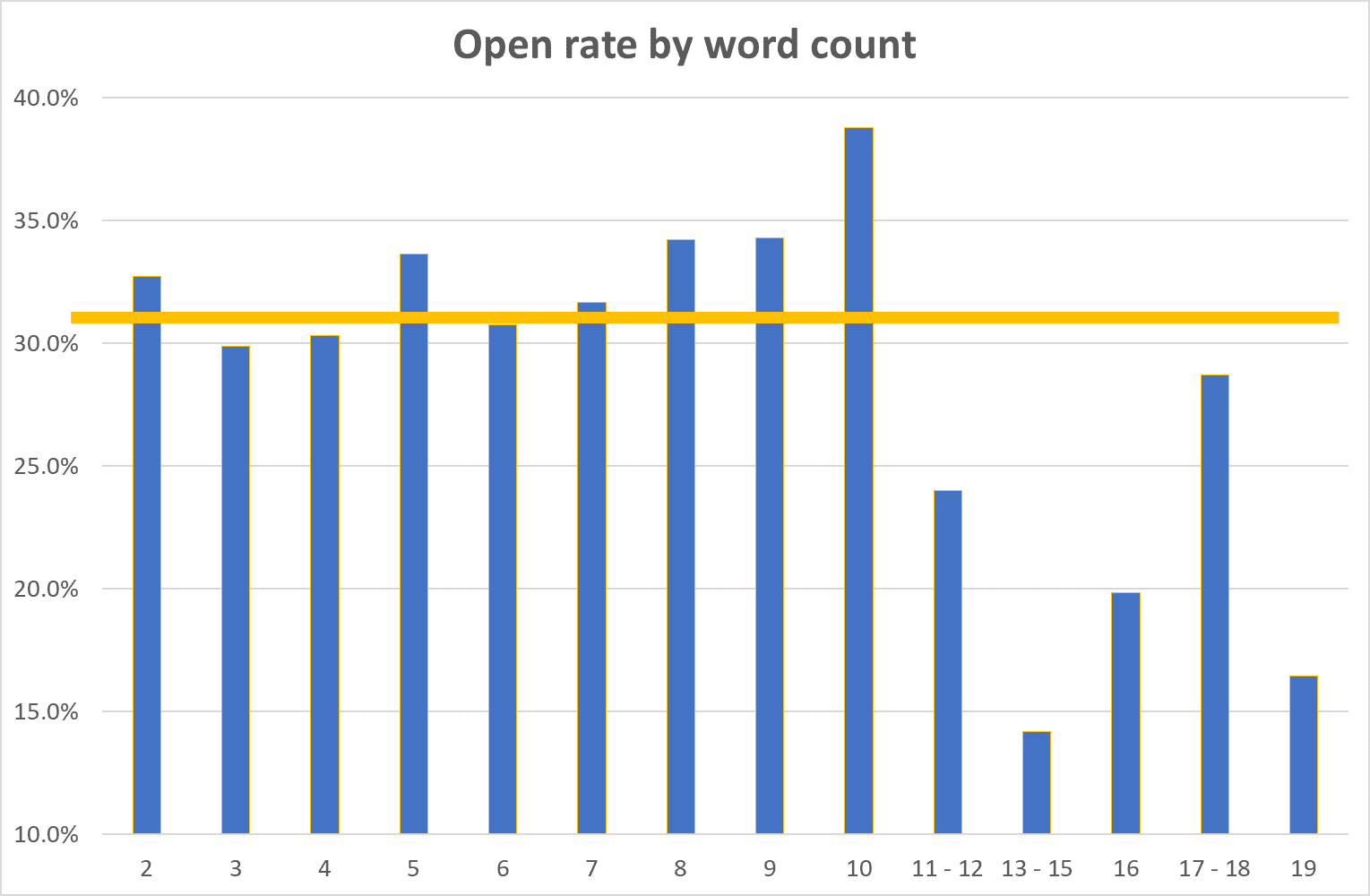 With the orange line representing the 31.2% average open rate, you can see that it’s best to either opt for super short (two-word) subject lines or aim for between five and 10 words – after this the open rate rug is pulled from under your feet.

Across our four million prospecting mails the best results were registered by ten-word subject lines, although nine-, eight-, five- and two-word subjects were not too far behind.

Not all two-word subject lines are equal.

For instance, there’s a world of difference between ‘Quick chat’ with its short, snappy informality and ‘Managing uncertainty’ with its cryptic message and formal/academic tone.

This difference resides not just in tone, however. It extends to the length of the words used and at which point there is simply too much of a subject line to work – and, perhaps, too little. 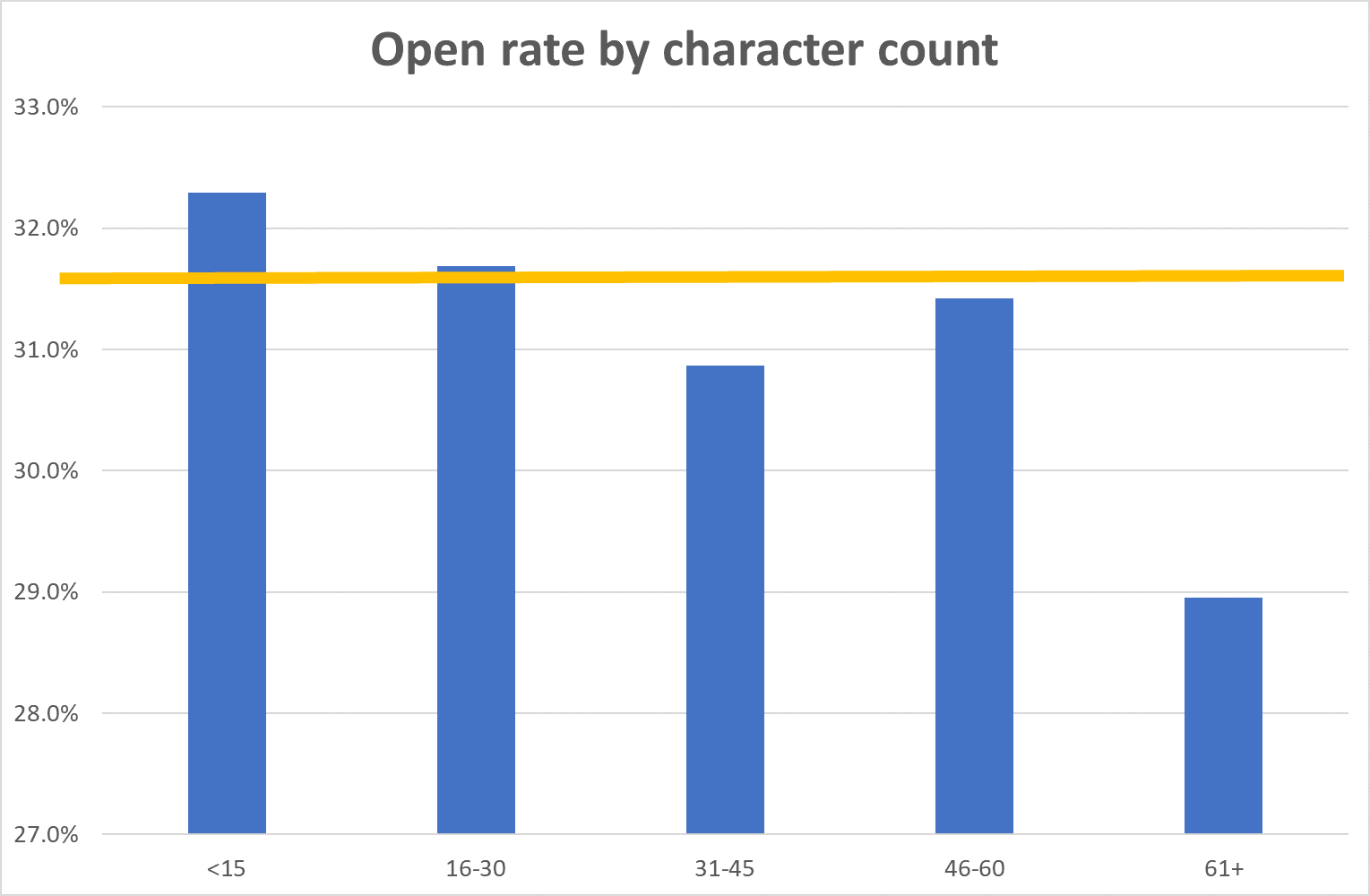 In opposition to word count, here we see a clear preference for less characters (or fewer and shorter words).

Certainly, anything over 61 characters is much more likely to be left languishing in the inbox, although, if you must use a few words, keeping them between 46 and 60 gives you a little lift (compared to sticking to between 31 and 45).

But less than 15 characters is where the real money is at.

This is where our results fly in the face of established ‘marketing’ know-how.

How many times have you been told that all communication must be personalised and that doing so will bring you better results?

OK, you can stop counting – it was a rhetorical question, really.

Where subject lines are concerned, we found that personalisation consistently resulted in reduced open rates.

That’s across the board, whether the subject line was personalised by name, company name or by date (i.e. a mention of the day the mail is sent or a day to call). 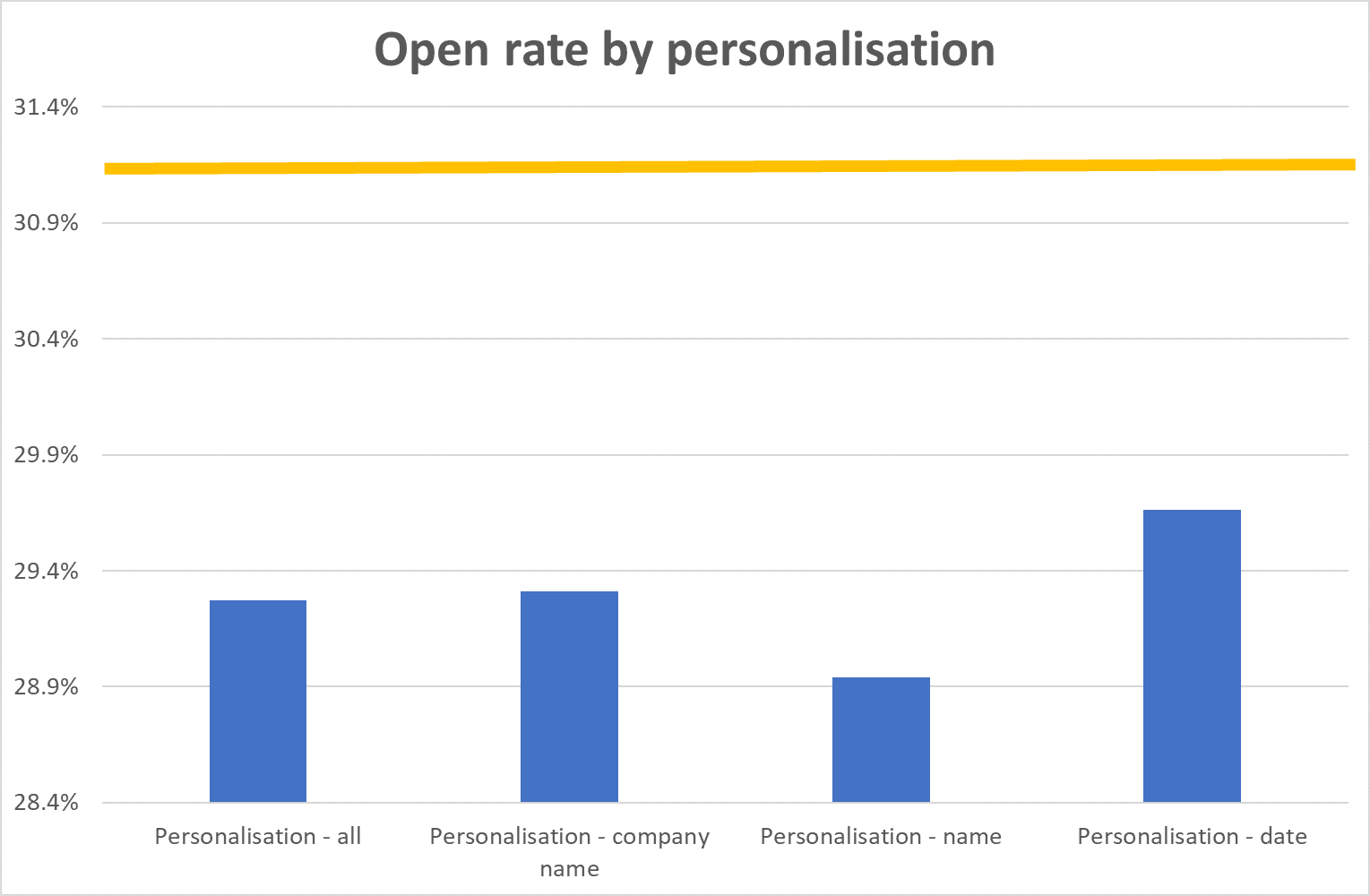 It’s possible that the use of a company name or a prospect’s first name is increasingly perceived as a spam tactic – rather than warming up a prospect it sends ‘spam’ shivers down their spine.

Personalising the subject line may have run its course for prospecting: the scores on the doors suggest that the average mail will achieve a 31.2% open rate but personalised subject lines will drop this to 29.3% in general, and as low as 28.9% if the personalisation used is by name.

As we’ve seen mentioning the company’s name in a subject line results in a lower-than-average 29.3% open rate.

However, we also discovered that mails that use the prospecting company’s name are, somewhat counterintuitively, much more likely to get opened.

That’s higher than the average and significantly higher than personalising by the potential prospect’s company name.

We think this is related to the suggested perception of subject line personalisation as spam.  Mentioning who the mail is from gives transparency – there’s no trickery here. It is honest and frank – and as such it builds trust.

And gets more opens.

We all love mail that has ‘nothing to hide’.

If personalisation by variables is largely ineffective, one classic marketing tactic still holds its own: the use of ‘you’ or ‘your’ in the subject line.

This is much higher than the 31.2% average – and suggests we should stop cramming data-driven personalised fields into our subject lines and adopt a simpler approach to speaking directly.

Increasingly questions (or at least question marks) in subject lines are likely to spring spam traps.

It’s another classic case of a ‘genuine’ marketing tactic being adopted by mass mailers and spoiling the party for everyone.

(We’ve found that you can get around this by asking a question without the appropriate quizzical punctuation mark at the end.)

A subject line with a question in it charts a 32.5% open rate.

This is, as far as differentials in the subject line that is used go, a significantly higher rate than the average (31.2%).

Unlike with personalisation – and despite a similar association with spam – the use of questions in subject lines confirms established marketing wisdom.

We saw before that the two-word subject line carries some clout.

Typical of these is the formulation ‘Quick chat’. It’s informal, inviting, creates an air of mystery and it promises a low barrier (‘quick’) to engagement.

But does it work? 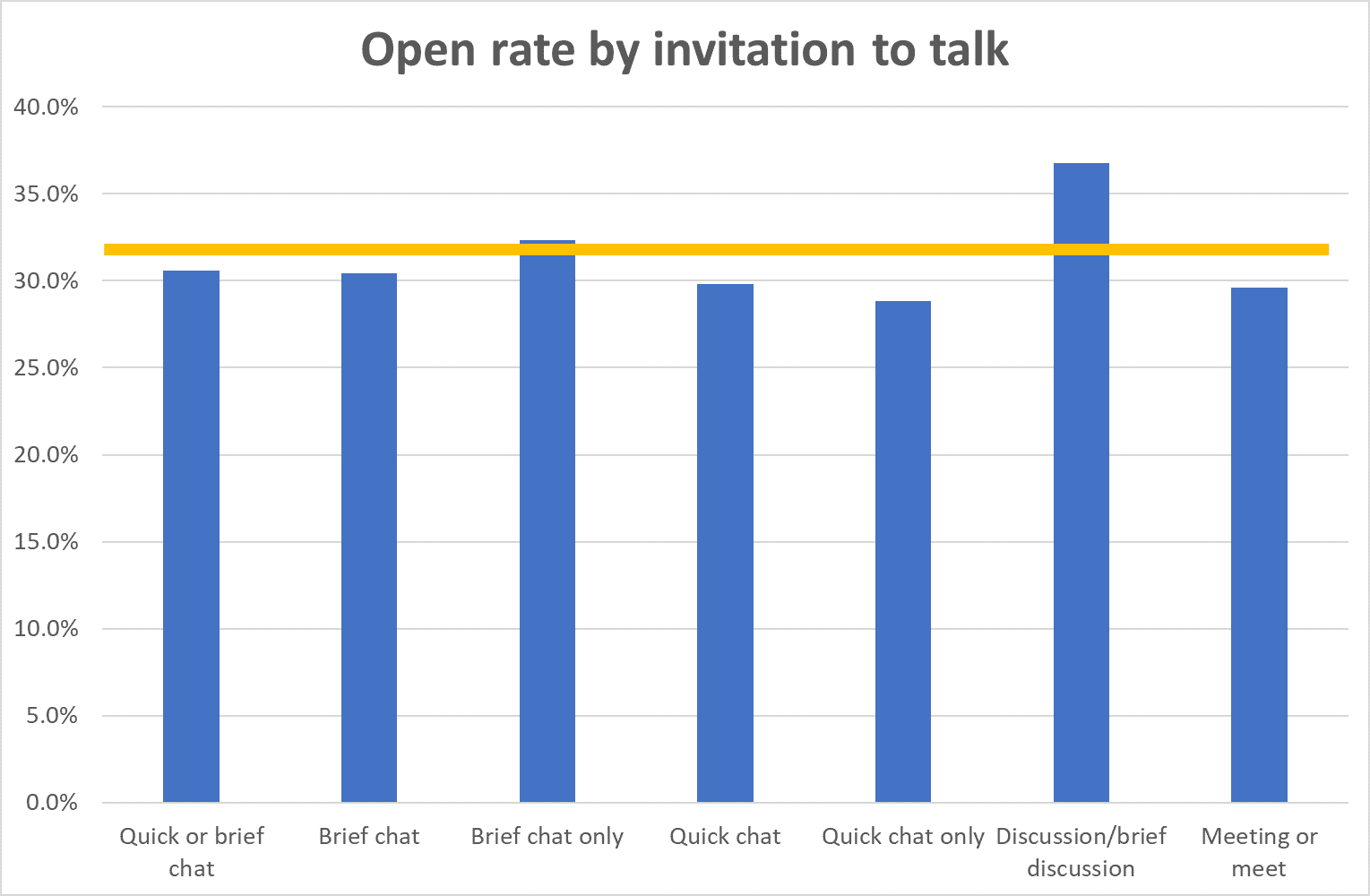 What’s shown here – from left to right – are the open rates for:

Compared to the average these invitations do not significantly differ – indeed, if anything, they are less effective.

The exceptions here are:

Subject lines that promise a discussion have an open rate of 36.8%. Such offers tower above the 31.2% average.

It may well be that chat – as invitingly informal as it is – lacks the dialogue and maturity promised by discussion.

Equally a discussion is a million miles away from the suggestion of selling – it may, as such, invite a warmer initial response to the mail.

Another phrase that evokes a sense of dialogue and participation is ‘partnership’.

We looked at the open rate for prospecting mails that used either ‘partner’ or ‘partnership’ in their subject line and found another prospecting gem.

Such subject lines achieved an average open rate of 45.1%.

That is 45% higher than our average and definitely a candidate for further exploration.

Let us know if it works for you.

We’ve already suggested that transparency in a subject line can produce results.

For example, the use of a prospecting company’s own name is significantly more effective than dropping the prospect’s company name.

But is there any currency in an abstract subject line – does an air of mystery invite opens?

Before answering this question, let’s just give some examples of what we considered an abstract subject line to be.

All of these fail to explicitly nail their colours to the mast – preferring to sail close to the winds of mystery.

Yes, they do – despite loving transparency it appears – in terms of opening mails – prospects also like to be enticed with subject lines that evoke rather than invoke.

What can four million prospecting mails tell you about the best subject lines to use?

It’s worth bearing in mind that we found there are a host of factors much more likely to significantly swing your prospecting campaign either way than subject lines alone.

But without an open there’s simply no chance of a prospect becoming a lead.

The best ways to secure those opens are:

Hope that helps – let us know how these work for you.