So many buyers, too few sales:
one way deal with B2B multiple decision makers

The number of people involved in B2B purchases averaged 5.4 in 2014 to 6.8 in 2016, and these numbers are expected to hit 10+ by the end of 2020. Just to complicate things further the customer stakeholders come from an ever-increasing range of roles, functions and geographies.

What’s a salesperson to do?

The prognosis does not look good.

Salespeople today have got it hard.

According to the CEB, the change in buying behaviour – in terms of the increase of decision makers – has moved the likelihood of a sale from 81% (when a single person makes a purchase decision) to 55% – 60% (when a second or third person is thrown into the buying mix) and down to as low as 31% when six or more buyers are involved.

Maybe we need to change the way we sell?

How do you solve a problem like multiple buyers?

The first comes from Wilson Learning Worldwide, a sales training company that frequently features in top 20 lists of providers.

The second comes from the hallowed pages of the Harvard Business Review, whose credentials need no checking. It was based on research and analysis by the CEB (now part of Gartner).

Here the salesperson is envisaged trapped in an escape room or playing a game of Cluedo. They read the clues, sniff out power, uncover positivity and fit the pieces together to make the sale.

To pass through the ‘sale’ door, three essential keys are needed:

Here it is visualised: 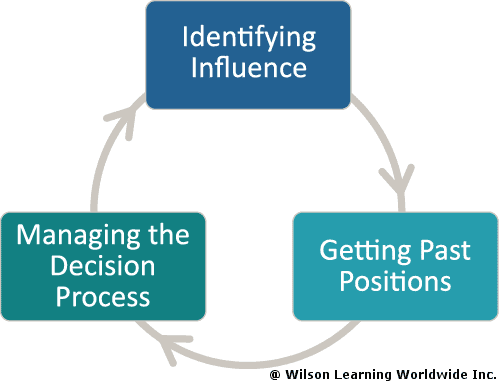 The main insight here is to never confuse influence solely with seniority.

Influence also stems from disposition – or how positively each stakeholder feels about your proposition.

You need to handle the varying combinations of influence and disposition differently: 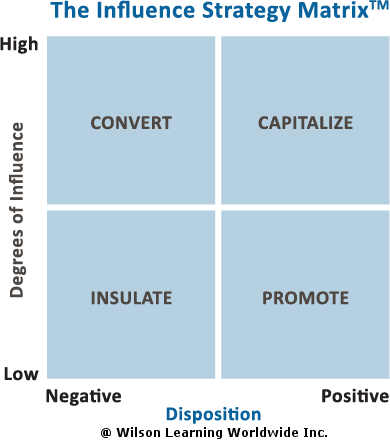 Perhaps the biggest challenge to unlocking the gates that each decision maker stands behind is to understand truly what lies behind these positions.

Decision making can quickly grind to a halt if one decision-maker says they want X and another wants anything but X.

Beads of sweat form on the digital marketing agency’s salesperson’s brow as the CMO goes hell for leather for an aggressive social media spend but the CFO staunchly refuses to authorise such a budget.

Picking herself up the salesperson began to explore the ‘interests behind each stated position. Leaving aside the sleuth work, she discovered:

Back at the ranch the salesperson put together a new proposal based on a highly targeted, industry-specific social media campaign that would retain the projected new customers but slash costs to bring a positive ROI.

The moral of this quick story:

From detective constable to conductor, the final stage requires manipulating and pulling strings based on your understanding of ‘influence’ and ‘interests’.

The key is to use your knowledge of ‘interests; to develop appropriate actions from each decision maker according to where they fall on the influence map.

To convert a person with high levels of influence but a negative disposition:

In this model of handling multiple decision makers, the B2B salesperson is the undoubted hero. They solve problems created by clients and carefully play one stakeholder off another to gain their achieved result.

From multiple madness to organised order, stalled decision making to solution sold through sleuthery and orchestration.

Or so the story goes.

In our next post we’ll look at a second approach that swaps schematics for simplicity and looks at the process not through the eyes of the harried salesperson but the confused customer.

Maybe there’s another tale to tell?

We can help you save time and money by getting you the best leads for your sales team.

Don't take our word for it; find out how with a free demo